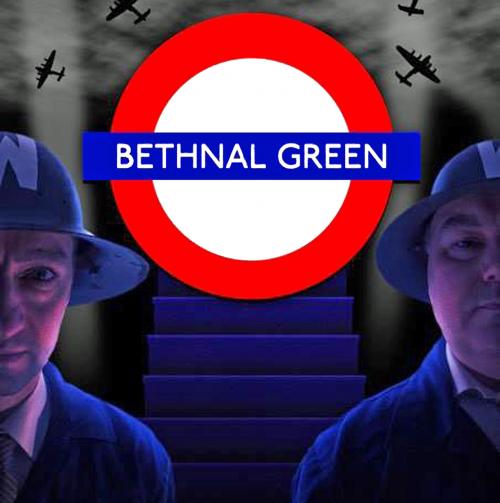 At 8:17pm on 3rd March 1943, the air raid sirens sounded in Bethnal Green, East London. People made their way through the rain to the deep shelter in the partially-built tube station.

At 8:27pm, a salvo of rockets sent up from nearby Victoria Park caused a rush to the small entrance. In the darkness, a woman tripped and fell and within seconds 300 people were crushed on the staircase. 173 people, most of them women and children, died. Cutbacks in official staffing and the provision of safety were partly responsible for what happened that night. It was the largest civilian disaster of the Second World War, but - to preserve morale - it was covered up by the Government and the truth only emerged after the end of the hostilities. Few people in the area escaped without losing a family member, friend or neighbour. Lucky Dog Theatre Productions have specially recorded this 'talking heads' version of the piece, written with the backing and support of The Stairway To Heaven Foundation. Two actors play a variety of roles in this disturbing experience.

'It’s a tour de force by both actors and a wonderfully moving and thought-provoking evening. *****' - Ludlow Fringe Review, 2017